There’s a great love of music in our clan and many of the clan are associated with piping, singing, drumming etc, however, all our information is scattered, a bit here, a bit there. Therefore we’ve decided to make our first attempt to bring it all together in one place, on this site, if you have any more information that’s not here, we’d be delighted to hear from you. Many thanks to John Follin a member and piper composer for his tune, Lady Saltoun’s Air, which you can listen to and Don Chitts, our Australian Fraser Society Commissioner, another piper, as well as member Gordon Fraser, for supplying so much information. We’ve tried to be as accurate as we can but information can be patchy, therefore, if you see any errors or possible errors, please don’t hesitate to contact us.

Unfortunately, due to so many regulations on copyright and music use, we have only one direct link to an original tune but we do hope that by expanding our database on Fraser clan music, you can maybe find what you want more easily.

Titles of Pipe and Dance Tunes with a Fraser Connection

Lady Saltoun’s Air – for pipes. John Follin. This is the only tune we

have a direct link to, versions of this tune can be listened to at Soundclick If you are in a band and would like to play it, John has the sheet music for pipes and for instruments, so please contact the editor for them or any other item on this page. https://www.soundclick.com/bands/default.cfm?bandID=979294&content=music

Fraserburgh Train, is a more recent song by a modern group, Police Dog Hogan, a superb song about a young soldier in Lord Lovat’s command before he lands on Sword Beach on D-Day. At present it’s on Youtube at http://www.youtube.com/watch?v=LDeY-zjkz8M

Captain Simon Fraser was born at Ardachie near Fort Augustus, in 1773. He subsequently moved to Errogie, in Stratherrick and for a long time was tenant of Knockie, in the same district. He was taught violin by Nathaniel Gow and not only was he a fiddler and composer, most importantly he was a collector of Celtic music. Published in 1816, The Simon Fraser Collection brought together the Airs and Melodies peculiar to the Highlands and the Isles of Scotland from 1715 to 1745, he continually updated his work until his death in 1852. He was a so highly esteemed a collector, that he inspired a play, “The Captain’s Collection”, by Hamish MacDonald, in 1999.

Tunes in the Collection Specific to Clan Fraser
Battle of Kinloch Lochy or Battle of the
Shirts (Lament)
Beaufort Castle (Dance and Song)
Lady Lovat(Strathspey)
Lord Lovat Beheaded (Lament)
Lord Lovat’s Welcome (Strathspey & Song)
Lovat`s Restoration (Strathspey)
Strath Errick (Strathspey)
The Bonfire (Strathspey) This was occasioned by the lighting of bonfires upon all the surrounding hills upon the late General Fraser of Lovat`s election  for the County of Inverness even before his estate was restored to him.
The Chieftain`s Lament (Song) which makes reference to the execution of Lord Lovat.
The Fraser Arms (Dance and Song)
The Isle of Aigas (Air)

Other Tunes by Captain Fraser

Simon Fraser Collection
The collection of some 230 tunes contains many fine tunes such as:

ADDITION
“Gorthleck`s Highland Plaid” and “The Belted Plaid and health to wear it”
On the run just before Culloden, Lord Lovat was staying at Gorthleck House  and these tunes were composed by his attendant minstrel. Here Lovat had his  only meeting with Prince Charles who was in hiding after Culloden. Thomas  Fraser of Gorthleck was Captain Simon Fraser`s maternal Grandfather.  The first tune was in praise of Gorthleck`s new plaid. As his prize  the minstrel claimed the old plaid and was duly granted it.

“A Hero never dies”-  this is a song composed by Dr Morison(assistant
surgeon) of the Fraser Highlanders after the death of Wolfe.

Gordon Fraser (member) has now received a copy of the Angus 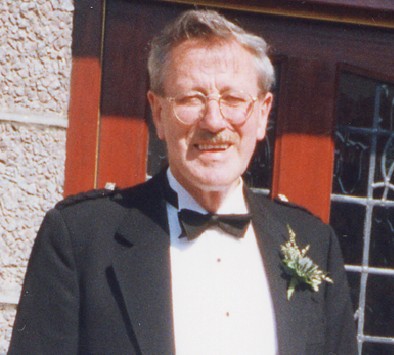 Fraser Collection of Scottish Gaelic Airs. He has been working his way through the collection on the fiddle, it contains a lot of good music and the preservation of all the tunes in these collections has been of enormous value to  the Scottish musical heritage.

This is a very important collection of  some 245 Scottish Gaelic Song Tunes- unfortunately without the words.  From  the translated titles it contains a
wide selection of song types, love  songs, working songs, laments, songs
celebrating some individual or event  and so on. It appears that the music
was originally for the harp.  The harp  was eventually displaced by the pipes
and the fiddle, causing a bitter  rivalry between harpers  and fiddlers,
occasionally leading to serious  violence.  Apparently the Clan Chiefs
operated a quasi- royal court complete  with minstrel (harper, piper,) fiddler
bard and jester.

Angus Fraser was the natural son of Captain Simon Fraser.  His large collection of songs and harp music contains well over 200 tunes and songs.    The list below represents his personal preferences and those of particular relevance to Clan Fraser.

INSTRUCTIONS ON DANCE STEPS, From Don Chitts
Contact the Editor if you want a copy.